the best of Gold & Sterling Silver

What is Vermeil?
Vermeil (pronounced: Vehr-MAY) is gold that has been electroplated onto sterling silver. Vermeil is also known as silver gilt, gold vermeil, and sometimes as silver gilded. 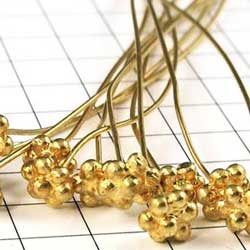 Requirements for an item to be considered vermeil:

Sterling silver covered by another material cannot be called vermeil

There does not seem to be industry agreement on the required conditions. For example, some say that the gold layer only has to be 10k and it would still be classified as vermeil. Out requirements listing above is based on the most generally accepted specifications of these requirements.

No matter what, this form of gold and sterling silver is very much prized and sought after as a component in jewelry making. Gold vermeil is popular because it gives you the look of solid, high-carat gold but at more affordable prices. 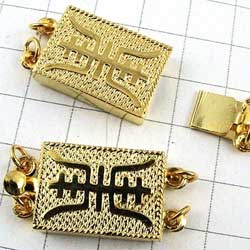 Vermeil is produced via fire-gilding or electrolysis.

The fire-gilding or wash-gilding process was developed in mid-1700s in France. In the fire-gilding method, an object is covered with an amalgam of gold and mercury. To prepare the amalgam, the gold is first reduced to thin plates or grains.  This then is heated red hot and thrown into previously heated, smoking mercury.  And iron rod us used to stir the mercury till the mercury evaporates, leaving the gold deposit.

In the 19th century, France banned this method of production as the mercury caused blindness. Today vermeil is safely produced via electrolysis.

In electrolysis, the silver object is wired as the cathode (negative) and a bar of gold as the anode (positive) and both immersed into electrolytic ionic compound.