The Growth and Growth of Swarovski

Swarovski is the world's largest producer of cut crystals which are produced in Wattens, Austria. The company is owned by Swarovski AG of Feldmeilen, near Zürich, Switzerland, founded in Wattens.

In 1982, Daniel Swarovski created the first Swarovski crystal using an automated cutting machine he invented. In 1985. He founded the company and set up his flagship crystal cutting factory in Wattens, Austria. This location gave him the ability to harness the local hydroelectricity which was required by the energy-intensive grinding process required to cut the crystals. He patented these processes.

Today Swarovski is known world-wide and the Swarovski Group of companies now include, among others,

The company continues to grow and expand laterally in strength and reputation. They run Crystal Worlds (Swarovski Kristallwelten) in Wattens. This is an indoor crystal-theme park. Swarovski was also a sponser for The Phantom of the Opera film in 2004. 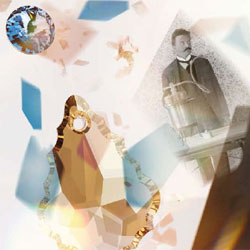 The Swarovski logo was originally an edelweiss flower. That was replaced by the swan logo in 1988.

The copyrighted XILION was released in 2004 - an optimised cut of Roses (crystal components with flat backs) and Chatons (diamond cuts).

In 2007 Swarovski, in partnership with electronics giant Philips, released the "Active-Crystals" consumer electronics range. They include four USB Memory keys and four In-ear headphones, all with some form of Swarovski crystal on them as decoration.

Crystallized™ - Swarovski Elements was also launched in 2007 and is an example of the superb and ongoing branding strategy that the company employs. It focuses and promotes its core products - crystal elements.